Screen capture of the ewe. 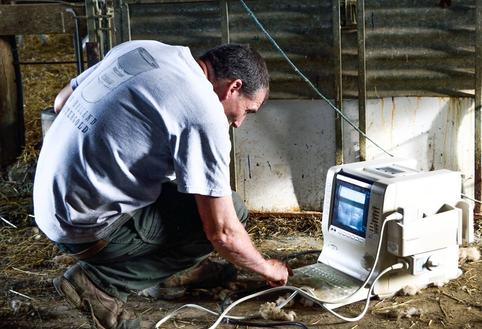 Decrease Lambing Labor: Scan your entire ewe flock and sort them into groups by the number of offspring. Open ewes can be marketed or moved out of lambing facilities. Single- and twin-bearing ewes can be sorted and placed in separate drop pens. Ewes with singles typically require very little assistance during lambing. Shepherds may choose to pasture lamb the single group or lamb the ewes in a separate area from the multiple-pregnancy ewes and manage more extensively, whereas, twin- and triplet-bearing ewes can be lambed in drop pens that are checked more often and managed more intensively after lambing. This strategy can reduce labor by concentrating efforts on ewes with multiple births and lead to an equivalent overall lamb survival rate.

How does the technology work?

Scanning equipment emits ultrasonic waves that reflect off dense tissue. The ultrasound console displays an image from the reflective waves. Pregnancies are identified trained technician who interprets the image. The ultrasound probe is placed in the rear flank area along with a lubricant to ensure good contact so ultrasonic waves can penetrate the skin. Early pregnancies (less than 35 days) are identified by pockets of amniotic fluid that fills the uterus; however, multiple fetuses are difficult to positively identify. Medium-aged pregnancies (35 to 90 days) are easier to identify and quantify because they are larger and the fetal organs are easily distinguishable. Older pregnancies (greater than 90 days) are easy to identify but difficult to quantify because fetuses are too large and too far within the abdominal cavity to distinguish between single and multiple pregnancies.​ 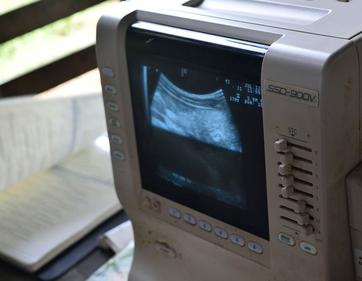 Henry and Mike examining one of the ewes to detect pregnancy. 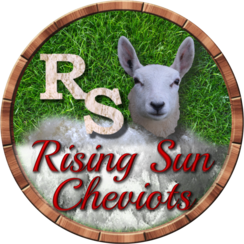 Information provided for use by Creative Commons license from NDSU. For for information visit www.ag.ndsu.edu/creative-commons

Increase Prolificacy of the Range Flocks: Range-lambing flocks struggle to select highly prolific replacements because the birth type of lambs is not known. Most often, replacement ewes and rams are the largest and healthiest lambs after weaning. Consequently, this method of selection favors single-born lambs. However, if ewes are scanned and sorted into different lambing pastures, selection of replacements exclusively from the twinning pasture will increase flock prolificacy.

Reduce Ewe Feed Costs: Removing ewes that are open is the obvious method to reduce the amount of feed required. However, we often fail to remember that we can save roughly 25 percent on winter feed costs by sorting single- and twin-lambing ewes or early and late-lambing ewes. Feed requirements increase by 25 percent during the last 45 days of gestation, and ewes carrying twins require 25 percent more feed than ewes with singles. Feeding ewes appropriately not only reduces feed costs but increases ewe health; single-bearing ewes that are offered feed to meet the twin-bearing nutrient requirements can become overly fat. Consequently, overly fat ewes are at a higher risk for lambing difficulty, typically do not produce as much milk and may have difficulty rebreeding during the next breeding season. 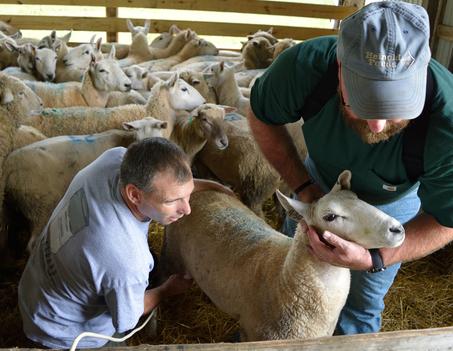 Why should I ultrasound my flock?

Increase the Number of Lambs Marketed: Expose your ewe lambs (6 to 9 months of age) to a ram for 30 days. Identify nonpregnant ewe labs early and keep only those determined to be pregnant. Flocks that select for ewes that breed as ewe lambs typically have more lambs and a shorter lambing season. Ewe lambs that become pregnant need to be managed differently than the main ewe flock because their nutrient requirements are typically 25 percent greater than mature ewes. Ewe lambs determined to be open prior to 10 months of age can be marketed as feeder lambs because they are young enough to still grade as lamb after a 45- to 60-day feedlot period. In addition, open ewes can be sold as replacements to low-input range sheep operations because they typically do not breed ewe lambs.